Azrael had no visceral emotions, he was not human, he was an angel, a different species of God’s creation.  He spent time in the human world, observing, but mostly doing his job.  The souls of the departed reacted much the same way to him, at first surprised and then completely surrendering, as if a great knowing was slowly reawakening.

When Jannie’s soul passed out of her body she looked to Azrael with large brown eyes of excitement. Excitement was not something Azrael had much experience with.

“Oh, you’re an angel! Mommy said an angel would come for me! Do I get wings like you? Can I fly? Does it hurt to get wings put on? Can I see Jesus? When do I get to meet God?” her questions waited for no answers as she quickly grabbed Azrael’s hand and looked up at him with childlike anticipation. He half smiled as he felt the tingling of her soul energy combining with his angel energy.

She became quiet as the realization of what was truly happening occurred to her.  They glided by her mother who lay on the floor sleeping next to her bed, a nightly ritual.  Jannie let go of Azrael’s hand and went back to her mother and gently kissed her forehead.

“My mommy will be so sad when she wakes up and I am gone. Please don’t let her be sad!” Jannie pleaded with Azrael.

Azrael broke his silence seeing the child’s distress, “Indeed the Great Sorrow will visit your mother, because love has been and always will be in her heart for you.  Her heart will heal in time and someday she will come to you and you will both rejoice.”

Jannie smiled, “You talk funny!” she nodded trying to understand his words.

It was odd, she did not feel the Great Sorrow herself, instead she felt an urgency to leave, a greater force of love beckoning her to another world, but she knew the Great Sorrow would stay where she had left an emptiness. She knew life would never be the same again for her mother and the others.

“I want to say goodbye to my cousin!” she demanded.

Azrael looked down upon the child; the spirit of the human child always surprised him.  The older humans were much more obedient only because they had forgotten so much, but the children still had memories and understood. “Of course, we will see her in her dreams as we pass by,” he offered.

Jannie watched as Azrael opened up the sky to a crystalline staircase.  It reflected the sparkle of the stars. Jannie was dazzled by its brilliance; she took her first step but then turned around and saw Becca watching her through her dream.  She smiled at Becca, her cousin and best friend throughout her short life.

Becca had stayed at her bedside when she was too sick to play, when everyone else had gone off to the beach on those balmy summer days, Becca had stayed in her stuffy room and played dolls or whatever Jannie wanted.  She could tell her cousin anything. Once she told Becca that an angel was coming to take her to heaven and Becca didn’t laugh at her, instead a small tear had escaped from her cousin’s blue eyes and she squeezed Jannie’s hand and said, “Do you member heaven?”

“Me too, it gets harder and harder to member.  But I do member the Angels, they were everywhere. Big and beautiful and so nice! Member? They never got mad at us!” Becca giggled.

Jannie vaguely remembered, but her cousins’ enthusiasm was so contagious she nodded and giggled with her.  She was sure she was right, Heaven was a good place and even if it hurt to die, she was going back to the Angels and God.

These thoughts flashed by in a millisecond as their eyes connected. Their bond of love continued as Jannie ascended up that stairs with Azreal holding her hand and in a twinkling of an eye they were in another land.

The first place she saw was the Great Meadow with every vibrant shade of green. She recognized the cattail grass that lined the azure pond with its lily pads floating aimlessly, the bent over weeping willow stretching downward as if to drink from the water and the pink, purple and yellow wild flowers dancing in the tall wild grasses.

Hanging from the tree was a wooden swing; she released her grasp from the angel and ran to the swing delighting in the coolness of the earth beneath her bare feet. She jumped up on to the swing and began to pump her legs, throwing her head backwards watching the angel approaching her upside down. “Oh! Heaven is wonderful!” she gushed.

She suddenly realized she was whole again; her once swollen belly that had been wracked with cancer was gone. She jumped off the swing and ran to the edge of the pond and looked well into her own reflection.  She was radiant, healthy and pain free.  She smiled at herself and giggled and then waved and giggled some more. Azrael stood watching, amused by this child’s delight.

“You are perfection now,” he stated.

“I feel so light!” Jannie burst out and twirled around and found herself floating off the ground.  Her eyes grew wide with surprise as she realized she could fly without wings. “I can fly? I can fly!” And she dashed around the willow and over the pond and then back again. “Hey, don’t I get wings? Mommy said I would get wings!” she looked at Azrael confused.

“You don’t need wings to fly here. Here, all you have to do is think of what you want and you can do it.  It’s a wonderful game to master!” he explained.

“Well, then why do you have wings?”

“Because, I am an Angel.” Azrael’s wings were a shade lighter than his hair, almost raven black.  The feathers were large and iridescent. He kept them together as he found that his wingspan was so immense that it often frightened the new souls.

“Show me your wings! I want to see you fly with them!” she begged.

Azrael released his wingspan and the enormity of his greatness caused a gusted of wind that blew Jannie backwards. “Wow! Those are huge!!” she laughed,  “Fly! I want to see you fly!”

Azrael bowed to the tiny girl and his wings pulsated causing him to rise up into the muted sky.  There was no sun in the afterworld, just a dusky light that saturated everything. He flew around the willow and over the pond as she had and landed next to her offering her his hand.

“Wow! You are so beautiful! It is too bad you are the Angel of Death!” Jannie gushed.

Azrael laughed despite himself, “And why is that?”

“Because you cause such sorrow but you’re so beautiful. God should have given you a better job!”

“Hmm, so you think I should not be beautiful? I think not, the idea that humans have of death is frightening enough, I think it is best if a creature of beauty comes to them in their transition. I do not cause sorrow.  The Great Sorrow comes from the veil of forgetting that God bestows upon you humans.”

“Why would he want us to forget? That doesn’t make sense!” She said perplexed.

“Perhaps if you remembered your heavenly home you would not take your earth home seriously. Perhaps the Great Sorrow expands your soul, makes you able to love more, become more.”

“But you said I was perfection,” Jannie protested.

“Yes, you are, but God’s creation needs to expand and grow.  You are perfection, but you can still improve.”

“You will remember in time. You will see that my words are true.  The creation of God is ever expanding, becoming more perfect.  You are and always have been part of that perfection.” He closed his wings and led the girl away from the Great Meadow to the City of Crystals. 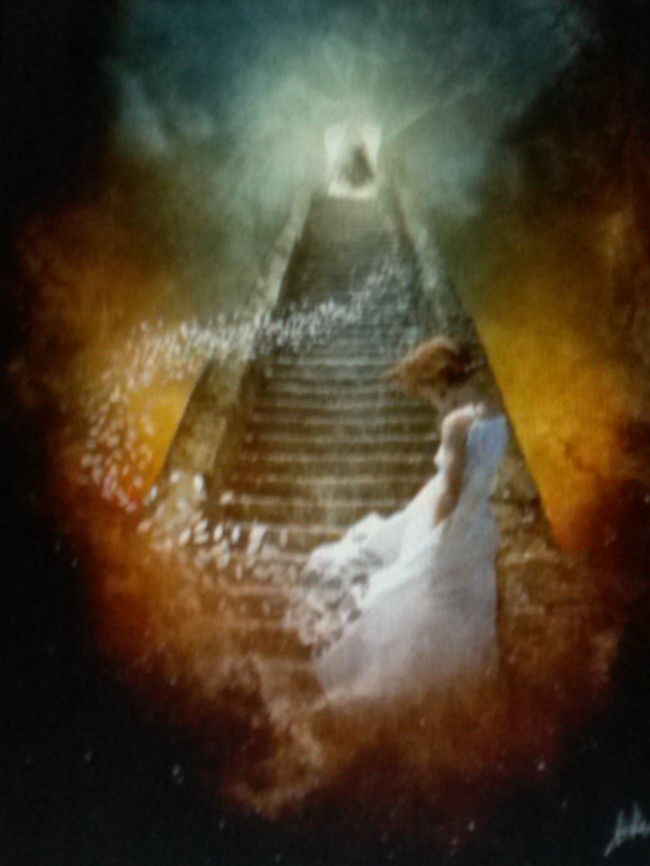 I am a hospice nurse who has been writing spiritually inspired books for the past seven years. I have written a children's book called "Little Star" which is available in ebook format http://www.amazon.com/Little-Star-Phyllis-Higgins-ebook/dp/B00BOEHUS6. I am currently writing a novel on spiritual love and the afterlife and looking for a publisher. It is my deepest wish to help with the transition from this world to the next whether it be through my work in hospice or through my written words. Please feel free to contact me with any questions or concerns you have.
View all posts by Angelnurse0513 →
This entry was posted in spiritual and tagged Afterlife, angels, Azrael, Death, Great Sorrow, grief, Heaven. Bookmark the permalink.